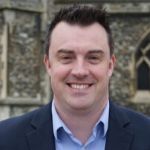 Thomas Clarke lives with young family in Hornchurch, in the London Borough of Havering, where he works as senior content editor for Golf Monthly magazine. Thomas attended King Edward VI Grammar School in Chelmsford and went on to read Film and Television Studies at Brunel University in West London.

Thomas became a member of the party following the EU Referendum of June 2016 – he is now the Havering Liberal Democrats Membership Development Officer and is very keen to represent the city that he knows so well and feels so passionate about.