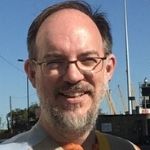 Richard Flowers is an activist and Lib Dem campaigner in East London, where he has lived for 25 years. Passionate about London's diversity and liberal values, he wants to build prosperity and tackle poverty and pollution in the East End, stop Brexit and stand up for his values of freedom, fairness and the future.

Originally from the North West, in 2017 he stood for Parliament for the Liberal Democrats in Macclesfield, near to his old home town.

Richard lives with his husband Alex. They were able to get married thanks to Liberal Democrats in government creating the Same-Sex Marriage Act.

His proudest achievements are contributing to that Same-Sex Marriage campaign and, as Chair of Tower Hamlets Lib Dems in 2016, being part of a team that got a 69% vote for Remain in the Referendum.