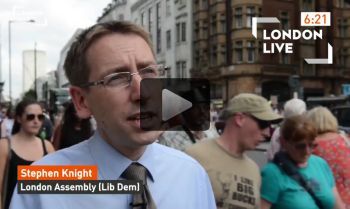 Watch Stephen Knight AM to see why we are calling for Oxford Street to be fully pedestrianised by 2020.

Oxford Street is one of the most iconic shopping streets in the world with 200 million people visiting a year. It is one of the cornerstones of London’s economic success. Yet it is under increasing threat from international rivals & indoor shopping centres like those at Stratford and Shepherd’s Bush.

Oxford Street is also currently one of the most dangerous roads in the UK. The diesel fuelled buses & taxis that stutter along it have produced the highest known concentrations of Nitrogen Dioxide anywhere in the world. And one person is knocked down by traffic on Oxford Street every 5 days.

I call on the Mayor of London to work with TfL and Westminster City Council to remove all motor traffic from Oxford Street, introduce a zero emission shuttle bus, leading to full pedestrianisation of Oxford Street by 2020.