Tim Farron and Caroline Pidgeon visited the Polish centre in Hammersmith to show solidarity with the Polish community and to make clear that xenophobic attacks it suffered recently will not be tolerated.

Simon Hughes: After the Referendum, what next?

Simon Hughes has launched a new survey to ask people what they think should happen next after the EU Referendum result.

In an email he wrote: "Many people are understandably shocked and angry after the European referendum result. People are worried about whether their partners or they themselves may lose their rights to live here even after decades of being good members of our community. Many are worried about the noises already being made by firms of moving jobs to the continent. Others are simply horrified at the upsurge of racist attacks which have been reported.

"The Lib Dems will stick by our pro-European beliefs - you can read Tim Farron's speech here. Losing one referendum doesn't suddenly change our principles."

"Please take a few moments to complete our survey on what should happen next - and do encourage others you know to do so too."

Ashdown: "A terrible blow to tolerance, to cooperation and to opportunity."

Paddy Ashdown has invited people to join him to defend the values of tolerance, cooperation and opportunity.

Writing about today's news, he said "I don't know about you, but I'm devastated. Today fear has beaten hope, fiction has beaten fact and our country has been catapulted into the unknown."

“Sadiq Khan is absolutely right to criticise the weak measures adopted by the previous Mayor.

“Boris Johnson was twice asked by the London Assembly to investigate the impact that overseas investment was having on the price, affordability and supply of homes for Londoners.   He arrogantly ignored the London Assembly and refused to undertake this much needed research into London’s housing market.

“However criticising the last Mayor will not in itself deliver one more home for Londoners. Sadiq Khan must now set out how he will not repeat the mistakes made by the last Mayor.”

Liberal Democrat leader Tim Farron and Paddy Ashdown have paid tribute to Jo Cox MP who was murdered this afternoon.

“I am utterly heartbroken at the news of the death of Jo Cox.  This is a devastating attack on our peaceful society. An attack on an elected representative is an attack on everyone.

“She was outstanding representative who stood up for her community diligently.  She also stood up for the desperate and those in need – I am proud of the stance she took raising the plight of refugees.

“Her compassion for the voiceless and dispossessed absolutely shone through to me. She was a star of the 2015 intake and was inspiring to listen to.

“A young family has lost a mum and a wife, a community has lost a great MP and Parliament has lost an authentic and passionate voice.

“It seems the vile politics of hate has gone from the darkened corners of the internet to violence on our streets. Our country is poorer for this mindless slaughter.

“My thoughts and prayers are with her family, friends and with all her colleagues in the Labour movement and throughout her community. We stand with you.”

Paddy Ashdown, who worked closely with Jo Cox on campaigns for Syria and refugees, added:

“I am terribly shocked and saddened by this news and my thoughts are with her family. She was someone with extraordinary courage and a principled campaigner for a more enlightened policy towards refugees. She represented all that is best in our country and our political system.”

“Sadiq Khan’s manifesto specifically said that Londoners won’t pay a penny more for their travel in 2020 than they do today.   There were no ifs, or buts, in that statement.”

“The reality is that many Londoners will see their travelcards rise over the next few years.    What we have found out today feels like a very early broken promise from London’s new Mayor.”

“Honesty over fares and investment in London’s transport has never been more important.”

Building a pedestrian and cycle bridge between Rotherhithe to Canary Wharf and extending the cycle hire scheme out to Rotherhithe are issues now firmly in the new Mayor’s in-tray following questions being raised at the first Mayor’s Question Time for Sadiq Khan by the Liberal Democrat London Assembly Member Caroline Pidgeon.

Caroline Pidgeon AM highlighted to the new Mayor the immense transport need for a pedestrian and cycle bridge between Rotherhithe and Canary Wharf, as demonstrated by the frequent overcrowding on the Jubilee Line created by commuters needing to cross the Thames.

Caroline also highlighted how Bermondsey and Rotherhithe are excluded from the cycle hire scheme, with the most eastward cycle docking station south of the Thames being just a few hundred metres from City Hall.

Responding to Caroline Pidgeon the Mayor described the proposed pedestrian bridge as a ‘great project’ and in relation to extending the cycle hire scheme stated “I don’t see any reason why we shouldn’t.”

“I have long championed a pedestrian and cycle bridge linking Rotherhithe to Canary Wharf.  There is a desperate transport need for a bridge here, especially to alleviate pressure on the Jubilee Line.”

“The case for the bridge is overwhelming.  The only issue is how it is delivered.   The Mayor must now come forward with concrete plans to ensure that this idea is turned into reality as quickly as possible.  There is no reason why the bridge could not be built and open within four or five years.

For more information see reports in the Wharf newspaper and the SE16 community website: 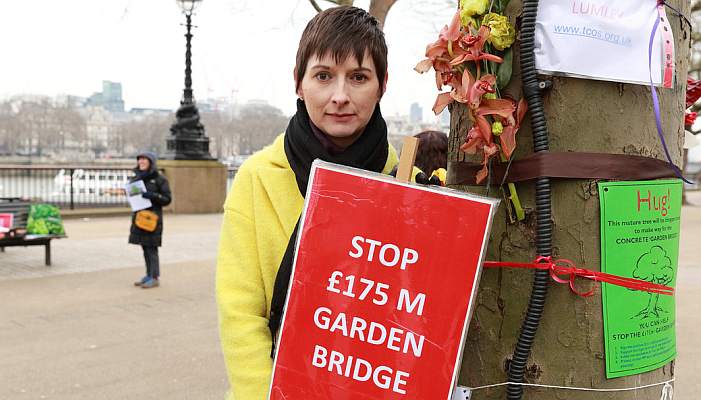 “Instead of tinkering with minor changes from the Garden Bridge Trust the Mayor should be seeking to recoup every penny of Transport for London funding that has been allocated to this highly controversial project.

“The Mayor should also be refusing to underwrite the annual maintenance costs of this project.

“There are numerous transport projects in London that desperately need public funding and are a far higher priority than this vanity project from the previous Mayor.”

Commenting on reports that Boris Johnson decided not to publish a report which demonstrated that 433 schools in London are located in areas that exceed EU limits for nitrogen dioxide, Liberal Democrat MP Tom Brake said:

“It is quite frankly shameful that Boris Johnson stopped such an important report from being published.

“Despite being elected on a pledge to open up City Hall, it seems Boris Johnson was quite content as Mayor of London to hold back vital information affecting the health of Londoners, and especially children.

“If Boris Johnson was truly proud of his record in tackling air pollution, he would not have hesitated to ensure this report was immediately made available to the public.”

Caroline Pidgeon AM, Liberal Democrat London Assembly Member, commenting on the Mayor’s announcement today that he will launch a formal policy consultation on measures to tackle air pollution including extending the Ultra-Low Emission Zone