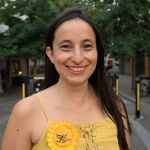 Frustrated by not having the right to vote, Jessie Venegas joined the Liberal Democrats just before the EU referendum in 2016 as a volunteer. Since then, she has stood for local council and at a general election, been an active supporter of the Hammersmith and Fulham local party and an active anti-Brexit campaigner pushing for a People’s Vote on the final deal.

Having grown up in Colombia, Jessie experienced what happens when the extreme right and the extreme left are not sensibly scrutinised, how socialism can turn violent and how irresponsible capitalism destroys communities. So she was naturally drawn to the Liberal Democrats as the home of centrist and level-headed politics.

As an A level Politics and Law tutor in South Kensington, she is determined to apply her knowledge and real-world experience to everyday political decisions. She firmly believes that capitalism should be encouraged to work for the benefit of the community as social prosperity goes hand-in-hand with national financial growth.