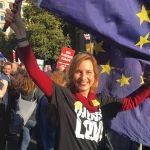 Irina von Wiese is sixth on the London Assembly list. She is one of three Lib Dem Members of the European Parliament elected to represent London in 2019.

Irina originally came to London from Germany in 1996 and has been an active member of the Liberal Democrats since. A descendant of two generations of refugees, Irina strongly believes in European cooperation and freedom of movement, and has been fighting for Britain's place in the heart of the EU.

As a lawyer, Irina is passionate about human rights and equal access to justice. She volunteers for a number of charities and has been hosting refugees in her home for the past 3 years.

Irina brings her unique experience as an MEP into the GLA campaign. The aim is to integrate EU and London-specific policies in key areas such as combatting air pollution, investment in green technology and the fight against organised crime and human trafficking.

Find out more about Irina's campaigning on her Facebook page.