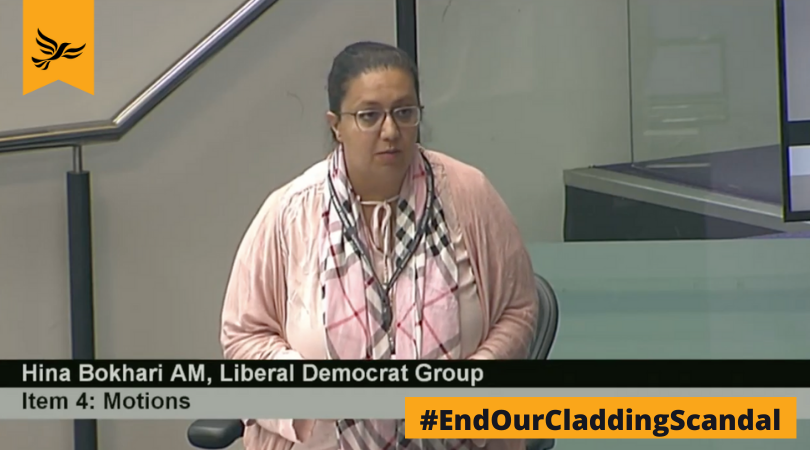 The Mayor of London should boycott developers who have failed to take action on their buildings at risk of fire, the London Assembly said this week after backing a Liberal Democrat motion.

The motion was proposed by new Lib Dem Assembly Member Hina Bokhari and seconded by fellow Lib Dem AM Caroline Pidgeon, calling on Sadiq Khan to use his powers as Mayor to do more to help Londoners who live in the blocks affected by the cladding crisis.

The @LondonAssembly passed my motion today calling on @MayorofLondon to

The motion won the backing of Conservative and Green Party AMs, but was not supported by Labour, who abstained.

Hina said: “We need to listen victims of this crisis and represent their needs.

“Of course the Government needs to do more to comprehensively deal with the building safety crisis, and many of us will keep pushing for this. Yet it is too easy just to call on the Government. We need to look at the levers and powers the Mayor has to ensure far more is done to support those affected by this shameful scandal in London.

“With an affordable housing budget of over £4bn the Mayor could send a clear message to developers by refusing to work with those who are yet to take action to remediate fire safety issues in their existing stock. There are numerous other actions the Mayor could take to support leaseholders.

“We need the Mayor to couple warm words with action. As well as lobbying Government he needs to use his powers and levers to their full extent to give practical support to the thousands of Londoners impacted by this terrible scandal.”

The motion calls on the Mayor of London to:

Delighted @HinaBokhariLD's motion passed in the @LondonAssembly & I was pleased to second it. The @MayorofLondon must stop working with developers not taking any responsibility for the #BuildingSafetyCrisis.

We'll keep fighting for all affected by this. #EndOurCladdingScandal https://t.co/k97xrgRUL3

Read the motion in full.

Watch Hina propose the motion, Caroline second it and the surrounding debate.