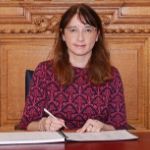 Florence Cyrot is the Liberal Democrat candidate in Lambeth and Southwark in the Greater London Assembly elections (Constituencies) and is ready to contribute to the London Assembly to make London a better place to live.

She came to London 18 years ago from France and proudly considers herself as a Londoner, now living in Brixton.

Florence is a Higher Education professional, with expertise in Student mobility and Transnational Education. She has previously worked in consultancy in Italy, France and the US and fluently speaks three languages.

She joined the Lib Dems after the referendum as the party with values of liberty, equality and community that promotes a fair, free and open society. In December 2019, she was elected ALDE Council Delegate (Alliance of Liberals and Democrats for Europe).

As a mother of three, she campaigns to act early on young people's mental health and to fight the rise in knife crime.

Sign up to support Florence's campaign as a volunteer.

Get a Postal Vote

Voting by post is the safest and easiest way to make sure your vote counts. Register now.