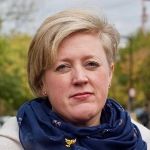 Dawn Barnes was elected to Haringey Council in Crouch End ward in May 2018. She contested Enfield and Haringey at the GLA elections in 2012, and stood against David Cameron in the 2010 General Election.

Dawn lives in Bounds Green, Haringey, and has worked in communications and marketing for over ten years. Her experience is diverse and she has worked in the private, public and charity sectors including for a charity working with people who misuse substances and alcohol; a local council and a sustainable design and regeneration consultancy. She currently works for King's College London working to recruit students from a broad range of backgrounds.

Dawn hails from the north of England and came to London by way of France, Japan and Oxford. She was determined to live in the city from a very young age and fell in love with London at first sight. She has been a trustee of a national charity and co-manages a network of reading groups across London.