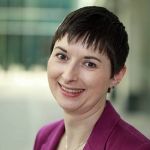 Caroline is leading the Liberal Democrat London Assembly list in the 2021 elections. She was first elected to the London Assembly in May 2008 and re-elected in 2012 and 2016. She is Deputy Chair of the London Assembly Transport Committee and a member of the Police and Crime Committee and Budget and Performance Committee.  She has a long record of campaigning on a wide range of issues, from childcare provision through to tackling knife crime and improving public transport and has exposed the failings in management on the Crossrail project.

Caroline was the Lib Dem Candidate for Mayor of London in 2016 and was a Southwark Councillor between 1998 and 2010.  Caroline worked in Local Government and the NHS for many years before becoming a full time politician.

Caroline has been a Trustee of the Centre for Literacy in Primary Education in Waterloo since 2005.

Caroline lives in Southwark with her husband and young son.

Find out more at www.carolinepidgeon.org and on her Facebook page.