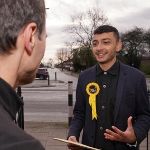 Anton was born in Brent, has lived here his whole life and is standing to represent Brent & Harrow in the London Assembly.

He has been campaigning in our community for a number of years and joined the Liberal Democrats after seeing the hard work being done by his then MP Sarah Teather and local Liberal Democrat councillors.

Anton has led campaigns to save a parade of shops in Dollis Hill, set up a borough wide refugee awareness group and helped to coordinate the Brent Remain campaign during the referendum.

He stood for the GLA in 2016 to be a voice for young Londoners in our community who are being priced out of our city. He is standing in 2021 because he believes London needs liberal, radical representatives who offer real solutions to big issues in the capital. Anton, who was elected to Brent council at a by-election in January, is looking forward to working alongside the rest of the London team.

Find out more about Anton's campaigning on his Facebook page.