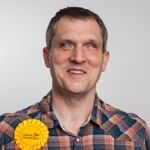 Allan Tweddle is the Liberal Democrat London Assembly candidate for Bexley and Bromley.

Allan grew up in Hartlepool but has lived in south-east London since 1998. He is a qualified chartered accountant, a governor at his local secondary school and a volunteer speaker for the Guide Dogs For The Blind Association. He is married, with two children.

Though he has always been interested in politics he only joined the Liberal Democrats in 2015 when it became clear to him that we could no longer take our Liberal, open, tolerant society for granted.

Allan said: "As a blind person I am constantly amazed by how helpful, supportive and thoroughly genuine my fellow Londoners are, whatever their political persuasion. I'm standing for the London Assembly because I want to give something back to this great city and to all those Londoners who have welcomed me as one of their own."