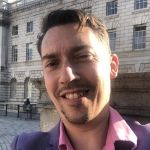 Adrian is ninth on the Lib Dem list for the London Assembly in 2021. He is standing because of his belief in equality and internationalism. Because he believes in the values of European solidarity and peace and wants to represent Liberal Democrat values as an authentic LGBT+ candidate in the most diverse capital city in the world. He got involved in politics in order to campaign for equal rights for all in society which weren’t available to him when he joined the Lib Dems in 2006.

Adrian loves London’s diverse and inclusive range of people, cultures, languages and interactions which illuminate your knowledge of the world's people and their associated populations.

His key priority is supporting Mental Health provision across London, something which effects every corner of the Capital from young people, to the homeless, the elderly, those who are lonely, those suffering from addiction around drugs, alcohol and niche chemsex area and those suffering depression, suicide and especially those from every diverse community including those with the highest rates of mental health illness within ethnic minority communities.

Find out more about Adrian's campaigning on his Facebook page.